Conflict beyond law and regulation. From the Gilets Jaunes uprising to the spontaneous strike wave in Italy at the early stage of the pandemic 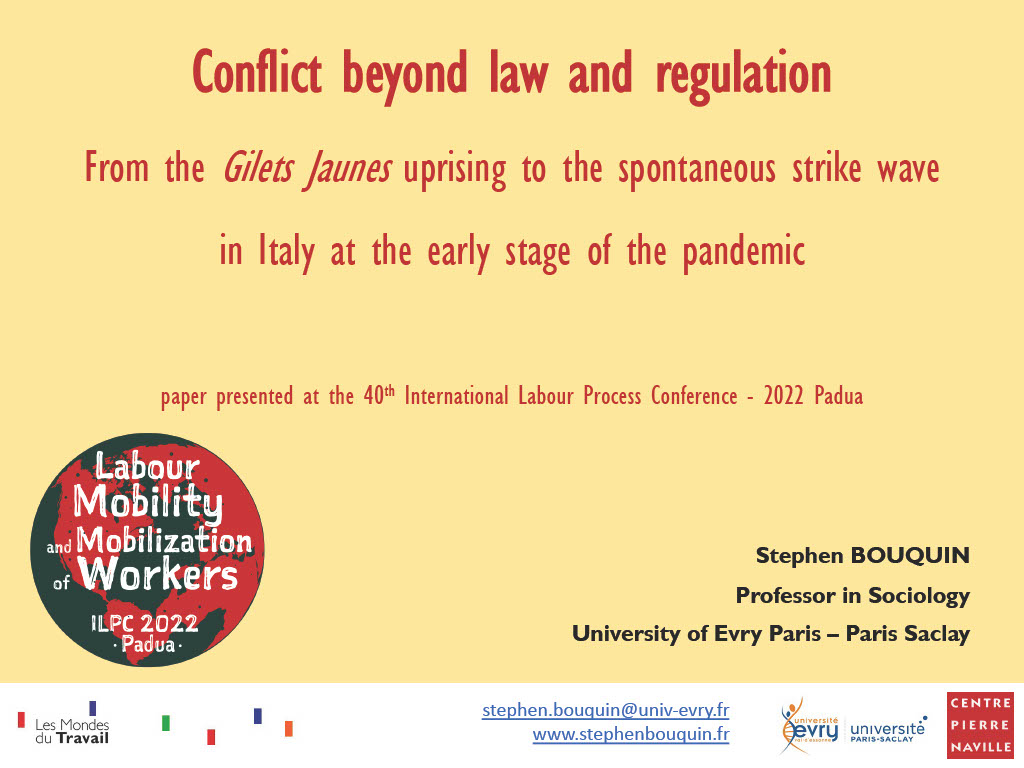 In recent years, we have observed the resurgence of unregulated and disruptive conflict, with a lot of uncertainty regarding usefulness of social regulation. Our paper will investigate two major cases. The first is the well known Gilets Jaunes revolt in France. This revolt was initiated in November 2018 against hiking prices and impoverishment but developed itself as a huge social uprising against Macron and his governance. This mobilisation, which lasted several months, was not supported by instituted and representative structures such as trade unions. Second, we will analyse the spontaneous strike movement in Italy that occurred at the early stage of the pandemic, in order to stop production and to hold back contaminations of Covid-19. The paper proposes to investigate this kind of conflict at three levels:

1 What are the commonalities, beyond the singularities of each mobilisation? Does the exteriority towards institutional and legal frameworks have common origins? Is it assumed or rather imposed, or both?

2 What are the class dynamics involved, formulating the hypothesis that there is a class-based community of destiny, in formation. This process is also marked by the main narratives held by the actors themselves as much as by the strength of the mobilisation and the opposition it encounters.

3 Is it possible to identify a common horizon and a level of agreement regarding the means to achieve this or should we first of all recognize the heterogeneity and fragmentation, both on the objective and subjective level?

My paper is based on qualitative field research among the Gilets Jaunes (January-March 2019), the analysis of a large scale survey with 4000 respondents as well as an ongoing survey among trade union activists  and workers in Italy.